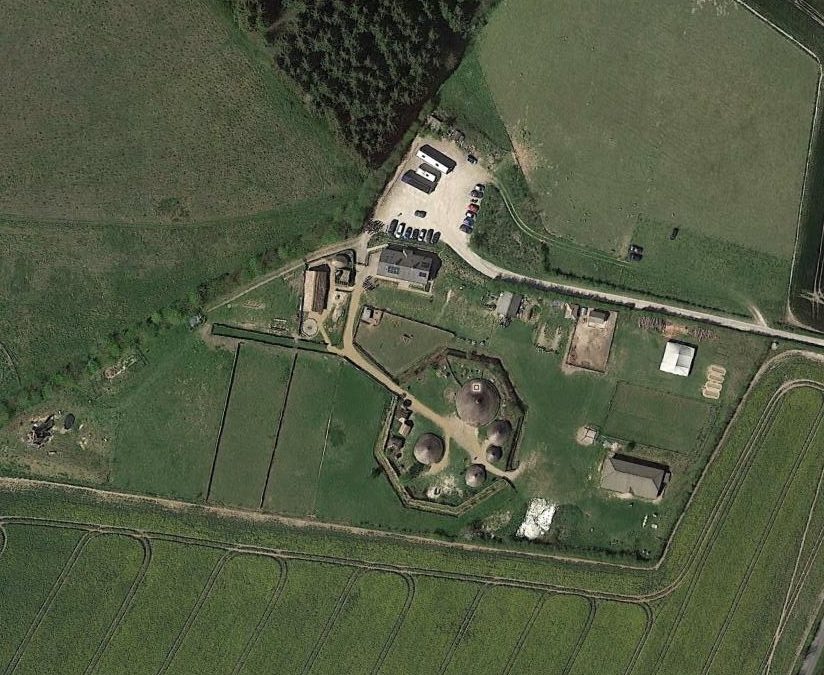 How do open-air heritage venues transport people to a prehistoric world  – and make it believable, engaging and informative – and so help visitors to learn from experience? It’s all about space and time!

Last month I spent time at two more fascinating open-air heritage venues: Butser Ancient Farm (BAF) in Hampshire, and The Ancient Technology Centre (ATC) in neighbouring Dorset. Just like the Scottish Crannog Centre (SCC; see earlier blog post), BAF began as a pioneering experimental project designed to help researchers explore how Iron Age houses might have been constructed, how long they lasted, and how people may have used them. The ATC, by contrast, was initially a school project to build a round house, and has a continued aim of teaching children the processes required to put food on the table or build a house from a local forest. Both venues have expanded over the years, and now include reconstructed houses from the Mesolithic through to the Saxon periods. Both are heavily involved in Primary education, providing engaging and inspiring visits where children can spend time in ancient buildings, learn crafts and skills, and gain direct experience of life in the period they are studying. Tutors focus on providing hands-on opportunities to allow children to engage directly with the prehistoric world rather than simply talking about the past. Providing an authentic and immersive experience is  key—as it was at the SCC—and all three places have found different ways of helping visitors, be they small or full-grown, to leave the present behind and enter the less familiar, sometimes puzzling world of the ancient past. This active participation is what leaves a mark and what, perhaps, may cause students and visitors alike to reflect on the advantages of being born in the 20th or 21st century.

Travelling in time and space at Loch Tay

So how do heritage venues transport people from 21st century Britain back to a prehistoric world and make it believable, engaging and informative? As I’ve encountered at some of the indoor museums I’ve visited, subtle choreography of visitors through the space can help – and at an open-air venue there are many such opportunities to exploit. An example is the transitional space that separates ‘now’ and ‘then’ – a space that can help visitors to prepare before they step across a threshold into the past, but which also provides a physical link between the two. 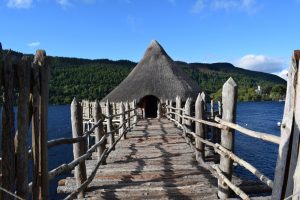 The path to the past at the Scottish Crannog Centre

At the SCC, groups of visitors congregate in the small exhibition space before they are lead onto the wooden walkway that passes over the loch to the crannog. Whilst on this ‘bridge’ to the past, they listen as the costumed guide sets the crannog in its geographical and archaeological context; from this position, (facing away from the modern marina next door), it is easy to imagine the Iron Age loch busy with other, similar crannogs, and with log boats plying trade and information along its length.

As visitors complete this short transit towards the crannog, they can begin to shed thoughts of ‘today’, turn off their mobile phones and prepare to travel back in time two and a half thousand years. On entering the crannog they are confronted with an array of unfamiliar sensations – the musty smells of dried bracken and sheep’s wool, of herbs and dried grasses, and of animals; the feel of uneven wooden poles underfoot, slippery with woolly insulation, and the coarse animal hides on wooden benches. As eyes adjust to the dim light from the doorway, new shapes take form – the central hearth, tools and vessels, and the wicker fences of internal structures. Finally, the door is closed and the illusion is complete: they have arrived in the Early Iron Age. Swallows twitter furiously in the rafters but otherwise all is quiet. A disparate group of 21st century travellers have become a prehistoric loch-dwelling community, seated around the hearth and eager to hear a new story.

In southern England, BAF and the ATC have even greater potential to exploit chronological choreographies—covering much greater periods of prehistory and beyond, and with more space to manoeuvre.

Walking back in time at the ATC

At the ATC, the main site is hidden from view by a high fence to school parties approaching via a leafy lane. They are led in single file along a narrow path that curves through woodland—the tutor explains that they are ‘walking back in time’.  They then enter a ‘wetland’ area with a small pond: the Mesolithic period. Here the children can see temporary shelters and a reconstructed wooden track way, before approaching the enclosed main area of the site. 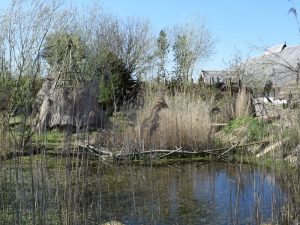 Walking back in time around the pond at the ATC

Entry is via wooden gates, which open to reveal the past world beyond. Here, the chronological path ends: the site has developed over time with new additions fitted into the available spaces, so tutors must guide their charges past a Viking longhouse, a Saxon Gruben Haus, and a Roman forge to reach the Iron Age round house at the top of the enclosure. Rather than following a path through time, visitors are effectively suspended in a timeless prehistoric space, completely remote from the ‘real’ world outside. No modern intrusions are visible: workshops where volunteers labour to maintain the sites with modern tools, and a kitchen, necessary for vital refreshments, are carefully concealed. 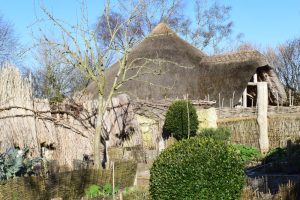 At BAF, visitors glimpse the pointed roofs of the Iron Age settlement as they drive along a narrow lane to the site, but before they can fully see the houses they must enter the Visitor Centre. Here they are given information about the site including, for any children, a ‘treasure hunt’ trail which will lead them chronologically around the reconstructed buildings. Staff advise visitors to turn right as they leave the Visitor Centre, and to begin their tour with the Mesolithic and Neolithic constructions, separated from the rest of the site by low, wooden fences. From here the trail leads towards the more clearly delineated Iron Age settlement, surrounded by a ditch, a bank, and a wattle fence. A sign invites visitors to ‘Step into the Iron Age’ where they can explore several round houses, each based on an excavated example. The enclosed settlement creates a space completely removed from both the present and from the other periods represented at BAF. Views are restricted by the constructions and by the natural vegetation, enhancing the feeling of separation and immersion. This is a favourite venue for film sets; the Britannia crew was here just the other week (although they wanted more mud and less grass!)

The fires glowing in the hearths of several houses suggest that the prehistoric occupants may have left only temporarily, intending to return to complete the weaving or the spinning they recently set aside. At weekends, costumed volunteers enhance the ‘set’, sharing knowledge and skills. 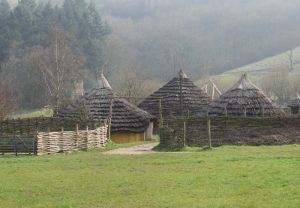 The IA enclosure viewed from the Roman Villa 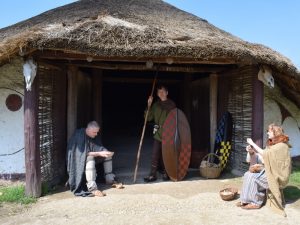 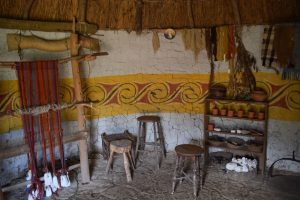 The occupant of the this house has just popped out 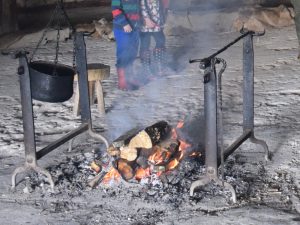 The fire is always kept burning in the Little Woodbury house

A reconstructed section of a Roman Villa is just visible through the gates of the enclosure, creating a playful dynamic amongst the volunteers. Although most of the round houses at Butser are based on pre-Roman examples, similar structures would still have stood in the landscape alongside (perhaps not quite so close!) the strange rectangular buildings that began to appear in the south of England in the first century AD. Members of the Butser IX Legion, the resident Roman re-enactors, view their Iron Age neighbours with suspicion, and have been known to march straight through the enclosure to assert their authority. Stray Saxon farmers (volunteers) venturing into the enclosure are also considered intruders by the Iron Age villagers who are quick to remind them that the settlement is neither their time nor their place!

At the Roman villa, a different form of spatial interaction is possible. A recent collaboration with the BBC has resulted in the production of an app allowing a 3D exploration of the building on your mobile phone! You can “See how the Roman soldiers used their swords, explore the Roman latrines and furnace, and spy on the Roman dining room.” The app is available to download here. 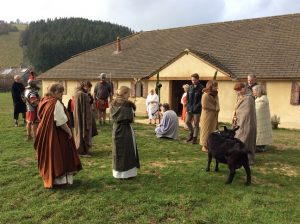 None of the three heritage venues are located on actual prehistoric sites, so cannot offer visitors the experience of ‘walking in the shoes’ of ancient communities as they might at, for example, Vindolanda Roman Fort. They do, however, provide a powerful insight into the lives people both through their homes and through their crafts. By physically entering the reconstructed houses and engaging in activities such as grinding wheat, spinning, or building fences, visitors and school children are able to empathise more fully with past people, and to appreciate their achievements, their resourcefulness, creativity, and resilience—all qualities that feature strongly in the lolly stick activity (see earlier blog). These places were originally created in order to generate archaeological knowledge through experimentation, but they also have an important role in conveying that new understanding by teaching through experience.

A huge thank you to all the staff, volunteers and visitors I have met so far on my travels. My next visit will be to Castell Henllys in Pembrokeshire. Will things be different in Wales? Keep checking the blog for future reports!