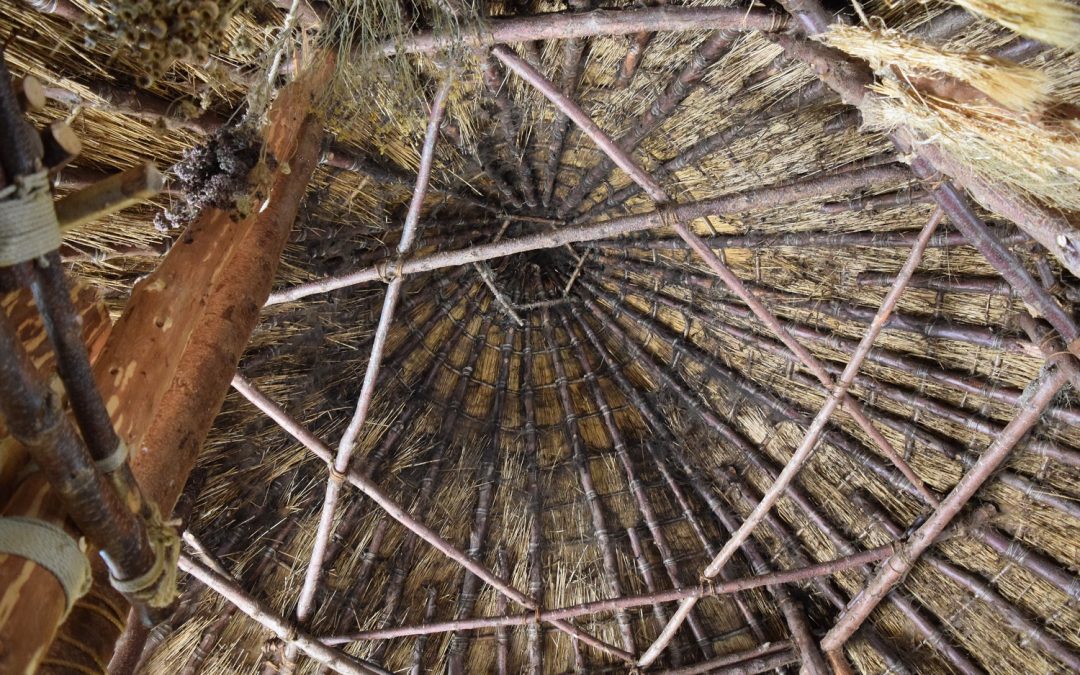 The last few months have been a whirlwind of roundhouses for the ethnographic strand of the project, so here is a brief update on activities from Central Scotland to the South of England.

My first trip into the Iron Age, last September, took me to the shore of Loch Tay in Perthshire, where a small heritage centre is almost hidden beside the expanding marina village next door. The Scottish Crannog Centre was founded in 1980 by the Scottish Trust for Underwater Archaeology. The main feature, a reconstructed loch dwelling, was built as an experiment, based on excavation results from the 2,500 year-old Oakbank Crannog located nearby. 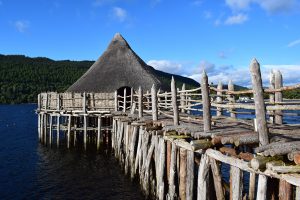 Groups of visitors are transported back in time as they don woollen cloaks and are led across the wooden walkway to the house which is set on a platform which rests on 24 posts driven into the loch bed. Inside, as their eyes adjust to the darkness, they make their way across the floor—spread with sheep’s wool and bracken—and take a seat on the fur-covered benches around the central hearth. Here, they enjoy a fascinating presentation by one of the costumed tour guides, much as Iron Age families who once lived in similar houses may once have gathered to hear stories around the fireside. 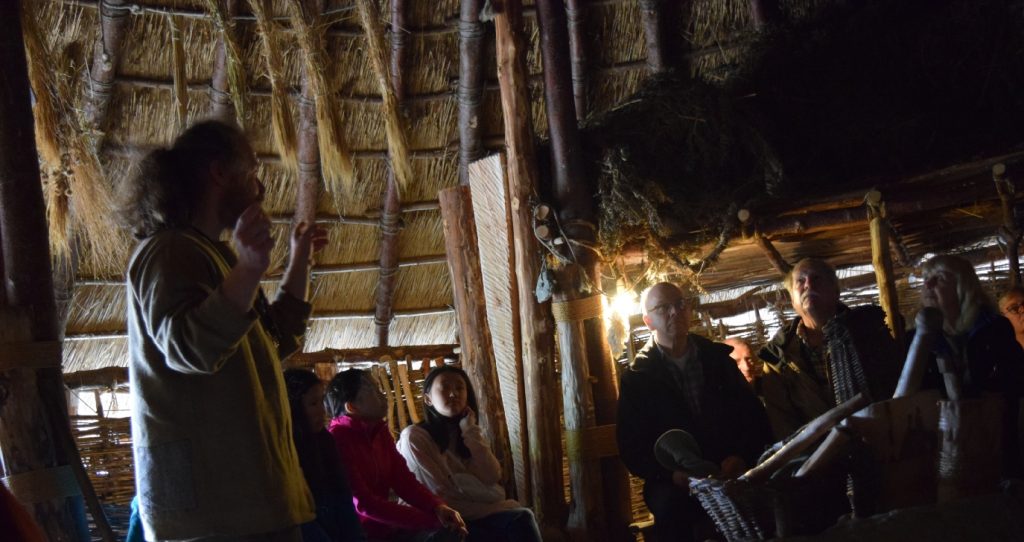 The crannog itself has taught the team much about construction techniques and life in the Iron Age. The roof required 49 alder trees weighing in at 2 tonnes, with a further 4 tonnes of thatch on top – all held together by 2 km of rope which in the Iron Age may have been fashioned from nettle stems. The roof was put to the test one winter when over 60 cm of snow settled on Tayside. The team discovered that the angle of the crannog roof – 50 degrees – ensured that any more than 20 cm of snow would slide off. The constructions were certainly resilient: the excavated example at Oak Bank is thought to have survived for between 100 and 200 years, with running repairs. The reconstruction is now 20 years old, and has already consumed around 600 trees in its relatively short lifespan! 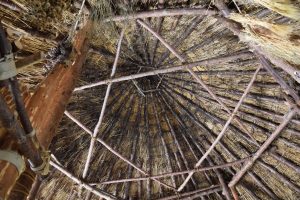 I spent a wonderful week with the staff and visitors, finding out how the centre works, the messages the team are aiming to convey, and how people responded to the experience. Big thanks are owed to everyone who took part in interviews, surveys, who wrote on lolly stick or who just spent a little time chatting to me.

This year began with another venture south, this time for meetings at Butser Ancient Farm (Hampshire) and The Ancient Technology Centre (Dorset). These outdoor heritage centres will hopefully be the focus of some more in-depth ethnography fieldwork later in the year. The staff at both venues were very welcoming and keen to participate in the project so watch this space for further info.

Living in the past at Butser Ancient Farm

Butser, in Hampshire, was established in the 70s when the Council for British Archaeology funded a working ‘ancient farm’ where researchers, led by the late Peter Reynolds, could carry out experimental archaeology on Iron Age life. (Further details of the history and philosophy of the site can be found here )  In 1991 the project moved to the present site, and the farm is now run by directors Maureen Page and Simon Jay. As I chatted to Maureen, I was amazed at how many school children trooped through the doors (30,000 per year, I later learned!), all eager to explore the array of house reconstructions dating from the Mesolithic to the Saxon period. 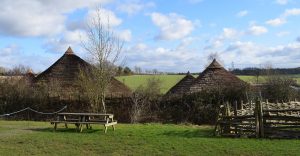 The roundhouses at Butser

Later, as I wandered around the site myself, I wondered where they had all disappeared to – but found many of them packed into the largest roundhouse, listening intently to one of the guides. Maureen had told me that the round house is much more popular than the nearby Roman villa, and I could see why. The experience of sitting in the round, in the semi-darkness, was so much more dramatic than a visit to the modern-feeling, bright, rectangular rooms of the villa next door. I look forward to returning for a longer visit when I can talk at length to staff, volunteers, and visitors. 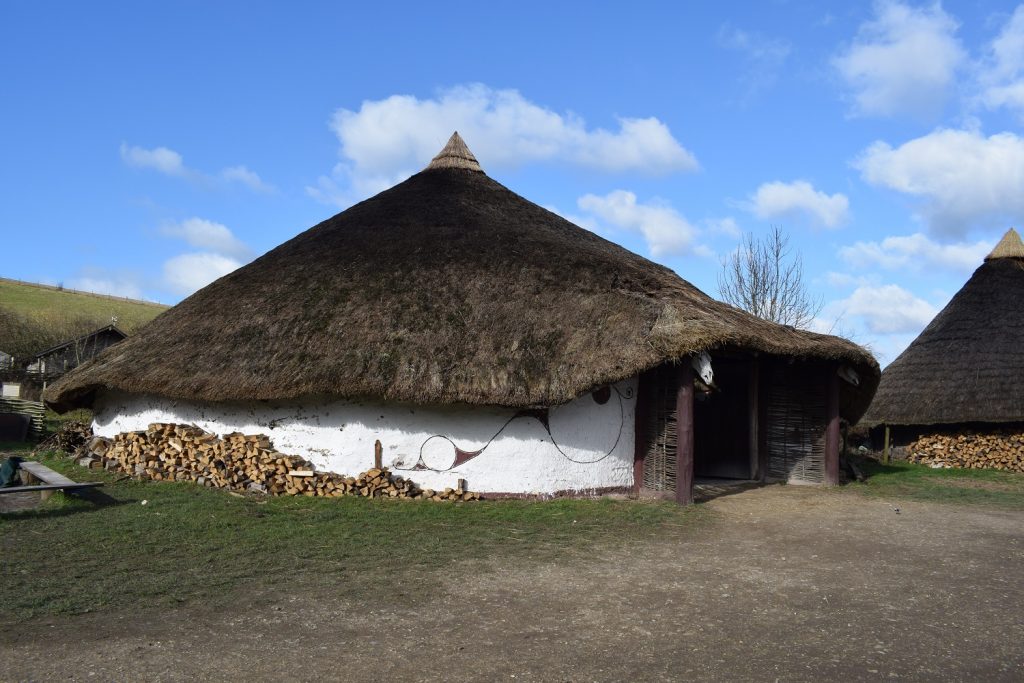 Reconstruction based on excavations at Little Woodbury

Next stop, the Ancient Technology Centre in neighbouring Dorset. On a lovely sunny but bitterly cold day, Abi and Nada showed me around this amazing site, tucked away behind Cranbourne Middle School. The ATC began around 30 years ago as a school project when teacher Jake Keen built an Iron Age roundhouse based on archaeological evidence, with children contributing to much of the construction and with material gathered locally. Over the years, other schools began to visit, and more buildings were constructed with the focus firmly on experimental archaeology. Today there are six reconstructed buildings including a huge earth house (a great story-telling venue!),  Neolithic log cabin, Viking longhouse, Saxon workshop, Roman forge, the Roman water lifting machine of Time Team fame and, of course, the Iron Age roundhouse. The site is also home to a small flock of Soay sheep who seemed to be enjoying the winter sunshine. The site is not open to the public – it functions primarily as an educational activity centre, although it does hold themed public events, the next one being ‘Prehistory’ is on 24th/25th March. Hopefully I’ll be dropping by to chat to visitors, volunteers and re-enactors. 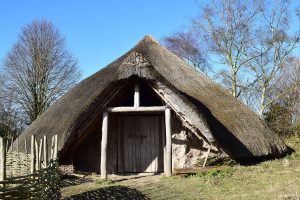 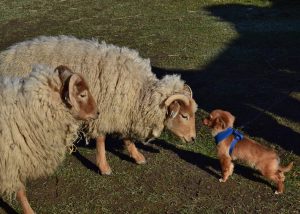 Next on my list for this year is Castell Henllys, in Pembrokeshire which will add a Welsh flavour to my explorations, and I also hope to head north again to check out a different type of Iron Age accommodation – the stone-built broch of Gurness, Orkney.