Who would have lived in a house like this? 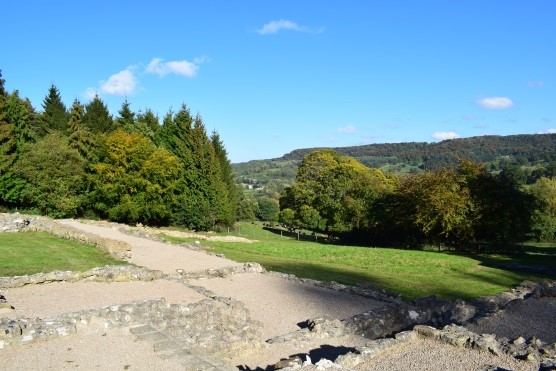 So far, most of my fieldwork has taken me to heritage venues that seek to reconstruct Iron Age life. But this project is equally concerned with the period that followed – when large parts of the British Isles became governed by Rome, and when new people, new ideas, and new ways of living spread across Britannia. Although a relatively brief interlude of around 400 years (the Iron Age lasted about twice as long in Britain), the Roman presence left physical, intellectual and emotional legacies that persist throughout British culture today. Most people are far more familiar with ‘Romans’ than with the more anonymous citizens of earlier periods, having encountered them both through education and popular media. The distinctive appearance of soldiers and emperors in bright reds and purples sets these representatives of Roman life clearly apart from the rather murky, nebulous array of prehistoric communities who preceded them. The iconic structures and statuary of the Roman Empire also contrast vividly with the less obvious remains – the often ambiguous mounds and ditches – of pre-Roman Britannia. Hadrian’s Wall, Roman Bath, and the many mosaics uncovered across southern counties are much more familiar than even the most famous Iron Age ramparts. Yet, the incomplete and extended nature of the ‘conquest’ and subsequent ‘Romanisation’ inevitably means that, just as I found for the Iron Age, there is enormous geographical variation in the physical evidence, and therefore in opportunities to develop heritage venues. 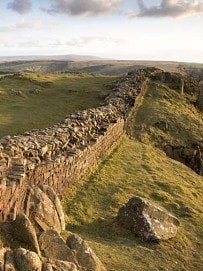 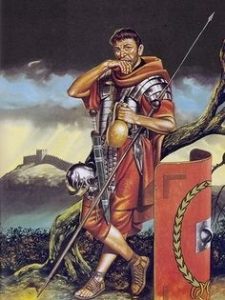 Hadrian’s Wall and a Roman soldier vs Maiden’s Castle and Iron Age farmers. 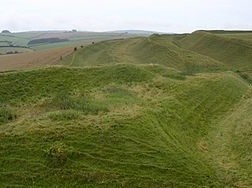 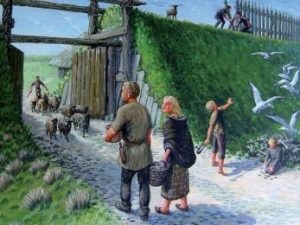 On my first ethnographic field trip I saw how visitors to Vindolanda on the Roman military frontier near Hadrian’s Wall engaged with the fort and its vicus; here in the North of England, most school kids will visit at least one of the forts along the Wall, and probably know their gladius from their javelin – all very necessary for keeping those crazy Picts at bay. It was clearly a tough life for the soldiers on the fringes of Empire, who needed extra socks sent from home. But what of those young students of history who grow up further south in Britain? In the south east, the early urban centres of Verulamium, Londinium, and Camulodunum present a dramatic story of conflict between the Roman authorities and unhappy local tribes, with rebellion, slaughter and destruction dominating the headlines. Further west however, across the Cotswolds and down through the North and South Downs, high-status rural villas abound; here the picture is of peaceful integration and cooperation, of prosperous, sophisticated – sometimes lavish – living, and of splendid architecture. What messages about this period do visitors to villas and palaces receive? Are they aware of the very diverse nature of Roman Britain, or that the vast majority of the population continued to live in small rural settlements, pursuing an essentially ‘prehistoric’ lifestyle?

Last month I took a trip via Ermine Street and The Fosse Way to Corinium and on to Aquae Sulis, and then south to Noviomagus and Durnovaria to check out some of the heritage venues based around the extensive remains of domestic and civic buildings. This time, I didn’t attempt to conduct surveys or to interview heritage practitioners; I simply visited and observed. I’m still processing what I discovered, but here is a brief flavour for anyone who might be tempted to visit any of these venues. On my travels I visited villas at Chedworth and Great Witcombe in Gloucestershire, and at Fishbourne and Bignor in West Sussex. I also checked out museums in Cirencester (Corinium) and Chichester (Noviomagus Reginorum), the Roman Baths in Aquae Sulis, a ‘town house’ in Dorchester (Durnovaria). That’s an awful lot of mosaics!  Here, though, I will restrict myself to three villas: at Chedworth, Great Witcombe, and Bignor, with the caveat that other Roman villas are available…

This National Trust venue provides what many people might expect from a day out at a traditional heritage venue: ample parking and facilities, a small visitor centre with café and shop, a modest museum, substantial remains in a scenic setting, a knowledgeable and friendly guided tour covering the basics, and a time-travelling Roman mosaic maker. The people visiting were also somewhat typical of those you might expect to see at a heritage venue on a Thursday morning in October: largely retired couples and school parties.

I joined a group of around 20 for an hour-long tour which took us through the West Range (preserved beneath a modern, wooden cover building), and along the exposed North Wing, via the nymphaeum. Although this required some manoeuvring and back-tracking to accommodate a school party on a similar circuit—and only half those who started remained to the bitter end—the tour provided a comprehensive account of the archaeology, the history of the site, issues of conservation, and managed to convey some of the excitement of discovery.

On-site interpretation was largely traditional, including room ‘labels’, artistic reconstructions, photographs showing archaeologists at work, and chalk boards explaining specific aspects. Inside the covered building, modern walkways and platforms provided excellent views of the mosaic floors and the inner workings of the hypocaust, and the Dining Room was brought to life by a projected image of shadowy villa inhabitants enjoying a noisy supper—a very successful application of digital creativity in an otherwise low-tech experience. 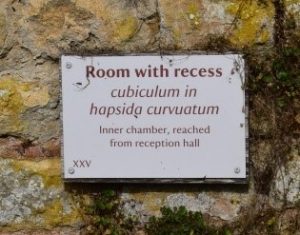 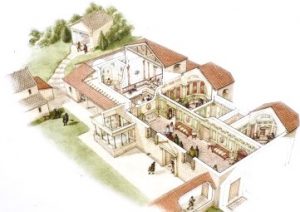 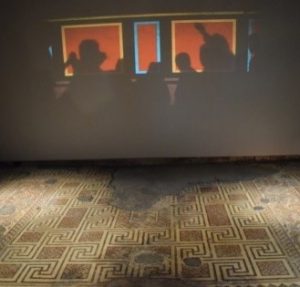 Traditional and contemporary at Chedworth

Great Witcombe: splendid isolation but not much information

If you prefer to engage with Roman heritage in a more personal (and free!) way, perhaps a visit to the villa at Great Witcombe, just 13 km west would appeal. Access is via a long lane that winds up the valley, through a farmyard to a small car park. A short walk up the hill (with fantastic views towards Glevum/Gloucester), leads to a secluded slope and the remains of the villa. A tired English Heritage panel provides some information, but this is more a place for the imagination than for lectures. I had it to myself in the late autumn sunshine. Perhaps it is more popular at weekends? It was disappointing to face locked doors to the buildings covering the mosaics, and no windows allowing a peek – but at least the grass had been recently trimmed suggesting some degree of management. 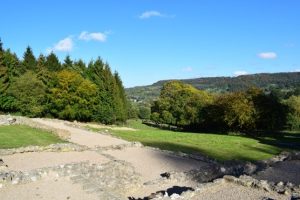 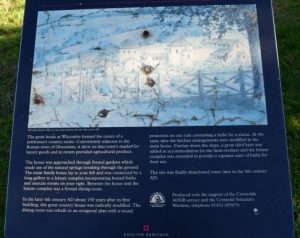 This was clearly once an impressive pile in a superb setting. The EH panel suggests that this was the centre of a nobleman’s estate. Built overlooking rich farmland, on several terraces, it included formal gardens and a leisure complex, possibly with water features exploiting the many local springs; even the farm workers had their own bath suite and accommodation. It was furnished with luxury goods purchased in nearby regional capital of Glevum. This serene and elegant image of Roman life is far removed from the tough existence of auxiliaries on the frontier, or the bloody conflict of the Boudiccan uprising.

Bignor: a museum in stasis

Bignor Roman Villa, just off Stane Street in the South Downs National Park, offers yet another way to engage with the Romans at home. Managed by the Tupper family, whose fortunate ancestor first struck the summer dining room with a plough in 1811, the site retains much of the character from its first public opening in 1814. The impressive mosaics are, as at Chedworth, a key feature, but in contrast to the state of the art covers employed by the National Trust, these are protected by a series of interconnected, thatched Georgian buildings. These are built directly onto the remains of Roman walls, and painted white to indicate their more recent vintage. The museum was developed before conservation guidelines and scheduling applied, and visitors are still able to walk on the borders of the mosaics – only the more decorative central panels are protected by chicken-wire fences. Many appear to be suffering from both algae and salt staining. 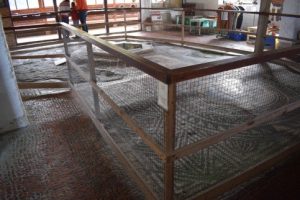 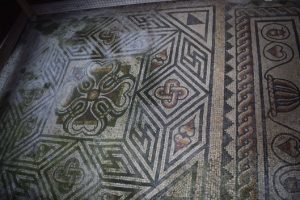 The small exhibition museum is also of its time, with artefacts recovered from the site presented in a very traditional way. There are no digital projections here: just a few Roman games for the kids to try, and the ubiquitous dressing up rail. The website promises “Low-technology learning” explaining that “Our off-grid site offers a refreshing change from computer-based teaching methods, with an emphasis on sensory learning.” The museum itself is almost of as much interest as the Roman remains. At Bignor, you can either step into the buckled shoes of the earliest Georgian visitors (1000 in the first nine months!) who flocked to see the freshly uncovered mosaics, or into the sandals of the Romano British family who once lived here, depicted in a simple painting, enjoying their meals in the summer dining room alongside a depiction of Ganymede carried by an eagle from Mount Ida.

He lives in a house, a very big house in the country… 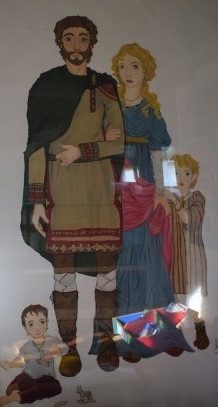 , then, these experiences of Roman life are a far cry from the harsh conditions in the northern military zone, and from the brutality, poverty and exploitation that characterised the larger urban centres. They were the sort of ‘des res’ properties that might have graced the Roman equivalent of ‘Country Life’ magazine, with owners competing to show off the latest in designer mosaics, and with bathroom suites that most of the population could only dream of. There is, however, little definitive evidence of the actual individuals who lived in these grand residences.

The Chedworth guide book speaks of ‘a man of consequence, possibly on the council, that administered the local area from Cirencester’, the mosaics reflecting his desire to demonstrate his Classical education. At Bignor, the occupiers are suggested to be either ‘a Roman immigrant family, a family from elsewhere in the Empire, or more likely, according to experts, a Romano-British family.’ At Great Witcombe, the villa is believed to lie on top of an earlier Iron Age structure suggesting a possible continuity of land holding, with the native aristocracy adopting Roman forms of wealth display.

These elite ‘country estates’ of southern and central England clearly reflect a very specific aspect of life in Roman Britain—one that left behind a substantial archaeological imprint in some desirable locations. Urban settlements are also well represented – largely because they now lie beneath modern cities and towns where each new building or infrastructure development reveals new evidence. More marginalised rural settlements which were home to the greatest proportion of people living in Roman Britain, are, however, poorly represented in the story of the period. They left behind much less for excavators to uncover and little to inspire visits from the public, let alone the development of heritage venues.

The Primary School National Curriculum (KS2) in England addresses all the dramatic aspects of Roman Britain: the invasion, the army, Hadrian’s Wall (which northern schools witness first hand) and to British resistance (prominent in the south east syllabus). It also stipulates the study of ‘Romanisation’ (their quotation marks): the impact of technology, culture and beliefs (‘What the Romans did for us’), which is very much in evidence at the villa sites described. No reference is currently made to the majority of the rural population for whom ‘The Roman Empire’ may have been a much more abstract concept. Perhaps it is time to set all the drama and colour of invasion and rebellion, and the impressive technology and architecture, against a wider backdrop of rural continuity? After all, to paraphrase literary theorist Ronald Sukenick, mosaics are all about dealing with parts in the absence of wholes. 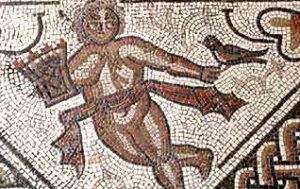