Housesteads and Carrawburgh: two Roman forts in the 21st century 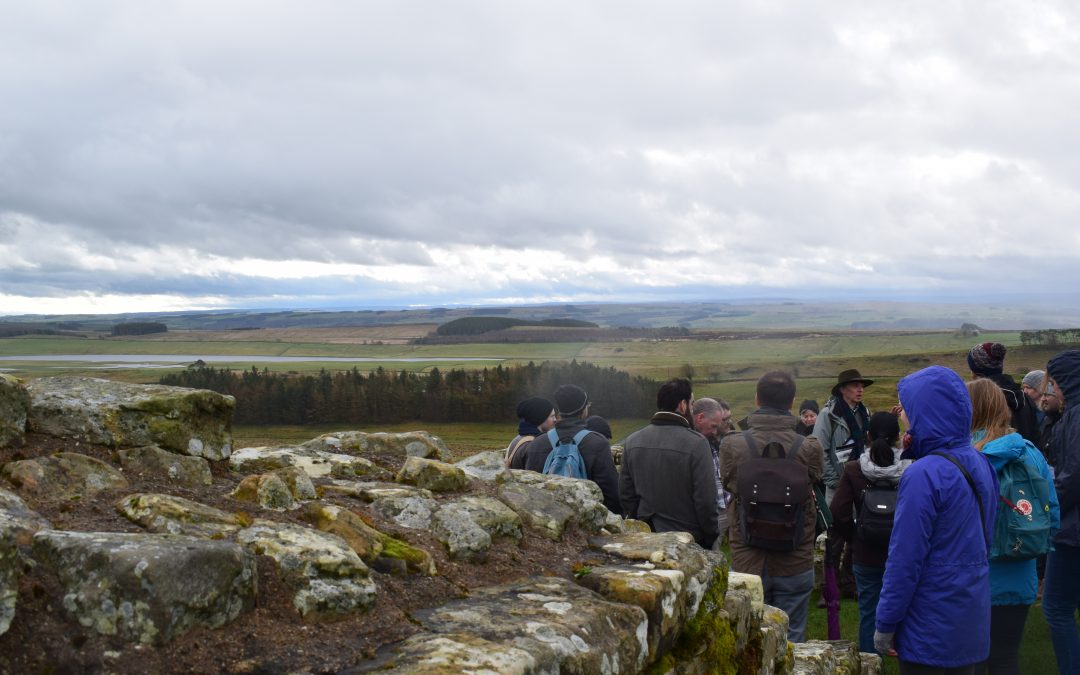 A couple of weeks ago the Theoretical Roman Archaeology Conference (TRAC) came to Durham. In addition to the usual sessions, there were four on-site lectures by various specialists. I joined Coach D, heading for the Hadrian’s Wall forts of Housesteads (Vercovicium) and Carrawburgh (Brocolitia) under the guidance of our project PI Professor Richard Hingley and Dr Darell Rohl. The two venues—each the site of a Roman fort, and set just a few km apart—provide an interesting contrast. These Roman impositions on the Iron Age landscape of northern Britannia have had very different ‘afterlives’.

Set astride the Whinsill escarpment, and with Hadrian’s Wall forming its northern side, Housesteads covered 2.2 ha and housed around 800 men. Inscriptions attest to the presence of the 2nd Augustan and the 6th Legion Victrix, as well as Tungrians (Belgians), Hamian Bowmen from Syria, Frisians (from Holland), and the Numerus Hnaudifridi (a Germanic mercenary unit). The associated vicus was abandoned in the late 4th century following raids from the north, and many of the civilian population were then re-housed within the fort itself.

Little is known of post-Roman Housesteads. A complex sequence of agricultural activity may indicate continued occupation but there is no direct evidence of this. In the 16th century ‘House steads’ was a lair for notorious Border Reivers, but its relative isolation helped to preserve the archaeology. From the 18th century however, the fort became a focus for antiquarian visitors to the Wall. Bought by John Clayton in 1838, it dominated archaeological investigation in the area for the rest of that century. A hundred years later, Eric Birley’s excavations focussed on the vicus and, between 1974 and 1981, there were further excavations inside the fort. The extensive remains include latrines, cisterns and water channels, the headquarters building and commanding officer’s house, barrack blocks, granaries, the complete line of the fort’s curtain wall and all four gates, and the vicus.

Today the site is owned by the National Trust (NT) and cared for by English Heritage (EH). EH manages the fort and small ticket office/museum/shop at the top of the site, provides on-site interpretation and an education programme, and manages the museum collection. The NT also has a presence, providing interpretation, catering, retail, and membership recruitment in the visitor centre at the lower entrance to the site. The car park (separate charge) is managed by Northumberland National Park Authority (NNPA). 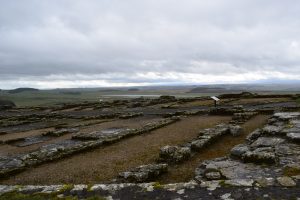 View across the fort: creeping mists 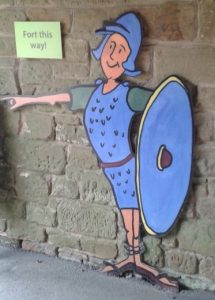 On our arrival—on an ‘Auden’ sort of day with wet winds and creeping mist—we were greeted at the visitor centre by a cheerful Roman soldier (definitely not one of Auden’s!) who pointed the way up the hill. The site is spectacular, both for its situation in the landscape and the extent and preservation of the remains. It is clearly curated but not overly so, with minimal interpretation and few barriers. The hilly terrain requires stout shoes, especially in wet conditions, but visitors are free to wander around the stonework unrestrained by prescribed pathways, fences, or viewing platforms. It is a wild and windy place and there is much to feed the imagination in the expansive views and the labyrinths of stonework.

A short coach ride to the east, set in open moorland, Carrawburgh is little smaller than Housesteads at 1.5 ha. A succession of auxiliary units recruited from across the Celtic world inscribed their dedications here: Tungri, Aquitani, Cugerni, Frisians, Nervii, Raeti and Batavi. The fort post-dates both the Wall and the vallum, the latter running right through the middle. The northern rampart was either the Wall itself as at Housesteads, or was built parallel, but this section was demolished in the 18th century to make way for the Military Road and now lies beneath the B6318. A small vicus occupied the low-lying marshy ground to the SW, where three temples also once stood: a mithraeum, a nymphaeum dedicated to local water deities, and a sacred well dedicated to the water goddess, Coventina. All are associated with a small stream which still rises nearby. This was clearly a ritual as well as a military landscape.

The sub-Roman history of Carrawburgh is unknown. It was first described by John Horsley in the mid-18th century, who also reported a vicus and a well. John Clayton partially excavated the site in the late 19th century, uncovering a bath-house, a tower, and Coventina’s Well. The mithraeum was found in 1949; the nymphaeum ten years later. The stonework is less preserved than Housesteads, perhaps due to its proximity to the military road. 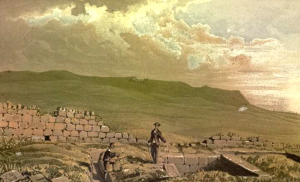 The site is privately owned, but the mithraeum is managed by EH; it is accessed from a NNPA car park (Pay & Display). An interpretation panel (NNPA) in the car part provides an overview, and a brief summary is given next to the gate which provides access to the earthworks (a marked improvement over the previous stile!) The ground within the fort is very uneven – possibly due the badgers from which the Roman name of Brocolotia/Procolitia is thought to derive. This place feels very different to Housesteads: only earthworks remain visible. The most striking feature is, perhaps, the line of the vallum which descends from the west, passing through the centre of the fort. 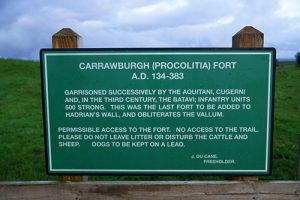 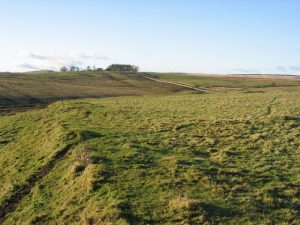 A trail leads south around the the fort into a small valley and the mithraeum. A more direct route passes through a boggy area fed by Coventina’s spring; perhaps immersion in this ‘sacred’ water would appeal to some pilgrims. Little is now visible of the shrine, or the nymphaeum. The mithraeum, however, has been somewhat restored, although the altars are replicas. The boggy interior (Coventina at work again?) and decaying EH interpretation panel suggest a degree of neglect, although there is evidence of recent grass cutting within the enclosure. There are no facilities here—no shop, no café—yet the site continues to draw visitors, some of whom leave offerings on the altars, or even re-enact mithraic rituals. 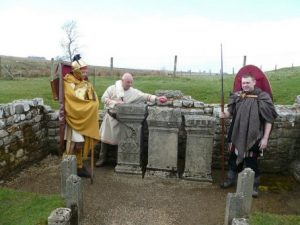 Ancient rituals at the Temple of Mithras. (https://co-curate.ncl.ac.uk/temple-of-mithras/) 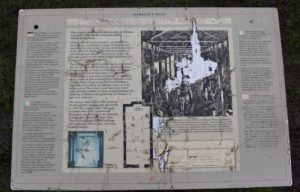 Panel in need of attention at the mithraeum 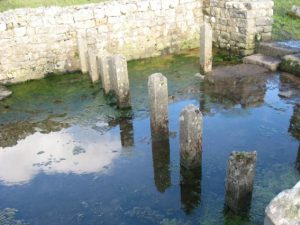 Housesteads and Carrawburgh provide very different experiences for visitors to Hadrian’s Wall. One is actively managed and promoted by both EH and NT; the other is privately owned and only lightly curated by EH. Both were subject to Clayton’s trowel but to my eyes, Housesteads appears ‘laid bare’ having yielded up all of its secrets – although Roman archaeologists will quickly tell you that this is far from the case. By contrast, the field of lumps and bumps at Carrawburgh seems pregnant with potential, despite Clayton’s excavations and subsequent work. Surely there is much more to be uncovered here – and in the vicinity. I suspect most visitors to Hadrian’s Wall Country would much prefer the ‘safety’ of knowledge offered by Housesteads—with its detailed descriptions and obvious structures—to the ‘challenge’ of Carrawburgh which is a little more demanding on the imagination. In some ways, Housesteads is reminiscent of the Iron Age hillforts that previously dominated the landscape: set on a high escarpment, maximising the natural topography for both defence and to establish a formidable presence. What better way to impress the locals than by using their own techniques? Yet the nearby temples at Carrawburgh hint at a more complex relationships between the local communities and the various visiting auxiliaries with whom they perhaps shared a belief in deities much more ancient than those worshipped by the Roman commanders.

Over the heather the wet wind blows,

I’ve lice in my tunic and a cold in my nose.

The rain comes pattering out of the sky,

I’m a Wall soldier, I don’t know why.

The mist creeps over the hard grey stone,

My girl’s in Tungria; I sleep alone.

Aulus goes hanging around her place,

She gave me a ring but I diced it away;

I want my girl and I want my pay.

When I’m a veteran with only one eye

I shall do nothing but look at the sky.

Piso’s a Christian, he worships a fish;

There’d be no kissing if he had his wish.